NC 49 is a narrow, winding two-lane road that curves through the low hills of the Uwharries between Asheboro and Charlotte. It's not a very busy road, and miles may pass when you're driving on this road when you never see another car. But don't think you're alone.

Back in the 1940s, when this road was even more lonely an isolated, one night a family was making its way home to Charlotte after spending the day visiting family. It was late at night, and the children were sleeping in the bak. The father drove his family slowly along the lonely road to avoid waking them. The night was clear and the drive was quiet and calm.

But soon they had company. The father saw lights approaching in his rear-view mirror. The other driver was coming up fast in a shiny new Ford, clearly someone in a great hurry, and seeming to pay little attention to anything else on the road. The other was nearly on top of the family's sedan when he seemed to notice them. He slammed on the brakes and pulled back.

This other driver kept tailgating the family. He would drive up close behind them, then back off, blinking his high beams on and off. But they were both driving along a long stretch of road with a no passing line drawn down the middle. The father would have pulled off to let the other car pass, but there was no shoulder and thick trees right up to the edge of the road.

The other driver kept getting more aggressive. He started honking his horn, and pulling up to where he was just inches away from the family's car. The father sped up to try and satisfy the angry driver, but nothing seemed to make him happy.

Suddenly, the other driver broke away. Ignoring the no passing sign, he pulled into the left lane and put the pedal all the way down to the floor. But the spot he chose to pass was at the base of of one the rolling Uwharrie hills, and what he couldn't see was that on the other side of that hill there was a big panel truck coming up.

The angry driver must have been going close to eighty when that truck came over the hill. He was boxed in - the family was on one side of him, the speeding truck right in front of hum, and thick woods to his left. The panel truck leaned heavily on its horn. The wife in the family car screamed as she saw what was about to happen. The Ford swerved hard to the left, enough to avoid a head-on collision but not enough to avoid getting clipped by the truck as he was going off the road. The Ford spun wildly out of control and was soon just a twisted, burning hunk of metal wedged between two trees. The driver never walked out.

Soon after that night, drivers began saying that something strange was happening on that road. People say that when they're driving along at night, they'll see a pair of headlights coming up fast behind them on the road. This mysterious car will follow them closely, acting very aggressively, and eventually it will move into the left lane to pass. As it passes, the first thing the someone notices is usually that the car is an old 1940s Ford, the kind you don't see much of outside of movies these days. But what's more amazing is that there is no driver visible in the car. And when it pulls ahead, the phantom Ford vanishes into the night.

It seems that wherever that driver is going, he's still in a hurry to get there, even though it seems that he will never arrive. 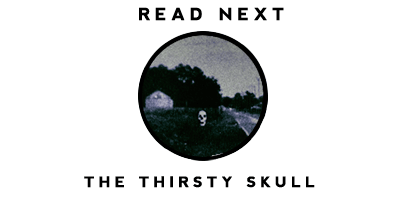