Some time ago, a man and his wife were walking along a big road on a cold and rainy night. They were soaked through and shivering and their shoes were sticking in the mud. They were hungry and it got dark before they got where they were going.

Then they came upon a big house with smoke coming out of the chimney and the light from a fire shining from the window. The kind of house rich folks live in. They went round the back and knocked on the door and heard somebody say "Come on in!" so they went on it, but didn't see anyone there.

What they did see was a kitchen with skillets and pots and everything needed for cooking. There was meat and lard and flour and cornmeal. There was a pot of beans smoking on the fire and a rabbit boiling in a covered pot. And it all smelled so good.

But there was still nobody around for them to see. But everything was set and ready for somebody, and they had been told to come on in, so they decided then and there that the somebody all that good food was for might as well be them. The woman took off her muddy shoes and peeled off her wet stockings and sat down. The man took a bucket went out to the springhouse to get fresh water for the coffee. They allowed they were going to eat those brown beans and cornbread and that molly cottontail, and drink it all down with some good hot coffee.

The man was gone outside and the woman was resting her feet, when in through the door came a man with no head. He was dressed fine in a coat and vest, shoes and galoshes, britches, and a starched shirt with a high collar, but he had no head. Just raw neck and bloody stump.

"What in the name of the Lord do you want?" said the woman.

And then that man started talking with no mouth to talk. He said he was in an awful misery. He said robbers killed him for his money. He said they dug around all day in the field looking for his money but they couldn't find it, so they took him into the cellar and buried him in two pieces. He said it's awful miserable being buried with your head in one place and your body in another. He said he was hankering to get rid of that misery. And he said that other folks had been there asked him what he wanted, but they hadn't asked him in the name of the Lord, but she had, and that's why he could tell her all about his misery.

About that time, the woman's husband came back in and near jumped out of his skin when he saw that raw neck standing there. The woman told the ghost who her husband was, and the haint told who he was, and that started the whole thing all over again about how he came to be the way he was, until that haint said if they'd come down to the cellar with him and dig up his head he'd be mighty grateful and would make them rich.

Naturally, they said they would and they said just let us get a torch.

"Don't need no torch" said the haint, and he stuck his finger in the fire and caught fire and lit up bright enough to light the whole room.

They went down a long way of steps until they got to the cellar. The haint said "Here's where my head's buried and here's where the rest of me's buried. Y'all dig over yonder where I throw a spot of light until you touch my barrels of gold and silver money."

And they dug up those barrels of gold and silver money buried under the cellar floor. And then they dug up the haint's head and hoisted it up the shovel. And he reached right over and stuck it back on his neck. Then he took his burning finger off and stuck it in a candlestick, and crawled right back into the hole he had crawled out of and the man and the woman covered him up with dirt again.

And they heard him talking again from under the ground. He said he was mighty grateful to them for burying him head and body together and it sure did ease his misery. And he said they could have all of his land and all of his money and be as rich as he had been.

So they took the candlestick and went back upstairs. They washed themselves with lye soap and the woman mixed up the cornmeal and spring water and greased the skillet with lard. She put hot coals around the skillet and on top of the lid and cooked that hoecake until it was done. The man put coffee and water in the pot and set it to boil. And they ate that supper of beans and rabbit and cornbread and coffee. And they lived in that house all their lives and had barrels of money. And the haint with no head never came up those stairs to bother them again.

This story is adapted from a Bundle Of Troubles And Other Tarheel Tales, a collection of North Carolina folklore assembled in the 1930s by the Federal Writers' Project. The Federal Writers' Project was started in 1935 to provide employment to writers, historians, and librarians during the Great Depression. This story was recorded by Nancy Watkins, who first heard it when she was a child from Dez Foy, an enslaved African-American. The name Foy suggest that Dez may have been related to the enslaved families at Poplar Grove plantation, built in 1850 by Joseph Mumford Foy. The families at Foy's plantation were separated and sold across the state. This is speculation, it's our loss that we know nothing of Mr. Foy beyond his name.

This story is a remarkable blending of African-American and European storytelling traditions. The ghost who guards a hidden treasure is a common motif found in European folklore. Before about the 19th Century, ghosts in most stories from Britain tend to exist for a purpose. A ghost in a story will deliver a message that some secret has to be revealed or some injustice avenged, and once that is done it disappears.

The notion of a ghost who will only speak if commanded to do so "in the Lord's name" is also an old one. It's present in the earliest known ghost story written in English, written in the back pages of a manuscript by a monk in Byland in the 14th Century. There are clearly European roots to this story.

But the style of telling is very much in line with African-American storytelling traditions. The supernatural element is duly regarded as being ridiculous, and never suggests and kind of real terror or threat. The emphasis here is much more on the pleasures of warmth and having comfort and good food, real pleasures in a difficult life. The subtext in these stories is that when you are living in the state of constant peril that is slavery, you don't need ghosts to scare you. Real life is frightening enough.

This kind of complex cross-cultural interaction is integral to folklore traditions in North Carolina, and throughout the American South. Different traditions respond to and comment upon each other. In embracing that diversity, we can acknowledge the sorrow at the roots of many of these stories, while still enjoying the beauty of what's grown form those roots. They can taste as good as that imagined hoecake. 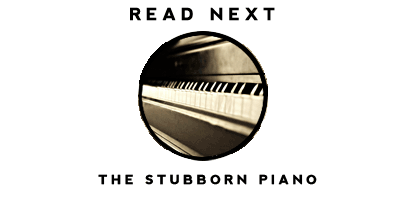