Devil's Rock is said to hold the footprint of Satan himself. Located off State Road 1131 in Largo, there's a place where the print of a left foot that is slightly larger than human size can be seen imprinted deep into a large rock.

Some time in the last century, there was a man in Flat Rock who was reported to be one of the meanest men ever to walk the Earth. This man spent his time brawling, drinking, cussing, and racking up a list of sins so long that if you wrote them all out the paper would stretch for miles.

Now, this man grew old, as we all do, and nearing the end he looked back on his life and knew where he was headed. He also knew he didn't want to go there. But the man was such a mean-spirited cuss that Heaven didn't look like much fun to him either. So he set out a plan to avoid going to either place.

When he knew his time was drawing near, the man went out and bought a bunch of the sharpest tacks he could find. He then went up onto the rock from which Flat Rock gets his name, spread these tacks around, covered them with old leaves, sat down, and waited.

Soon enough The Devil appeared before him, come to carry his soul away to the fiery pits below.

"You ready to go?" The Devil asked him.

"I am," said the man, "But before I do I'd light to get a good look at you. I've been on your side this whole life. I've heard so much about how magnificent you are to look at. I know that you're a busy man. And when I'm down in your place I won't get much of a chance to see you, there being so many wicked people up here needing your attention, so if you could kindly step back a bit so I can take you all in, I'd much appreciate it. It'd be the best reward I can think of in this evil life I've led."

Now, the Devil is a vain creature, and he ate this flattery right up. He puffed himself up and stepped back to show off, and stepped down hard on to those hidden tacks laying on the ground.

The Devil hollered and jumped up in the air. When he jumped, he pushed down so that he left his right footprint in that rock in South Carolina. He went up so high that when he landed he landed miles and miles away in North Carolina. And when he came down he came down so hard that when he hit the ground he forced his left footprint into that rock in Largo.

After that, Satan was too scared to have that man, and Heaven wouldn't have him, either. So now his ghost walks the Earth, up and down between those two footprints, laughing to himself all the while. 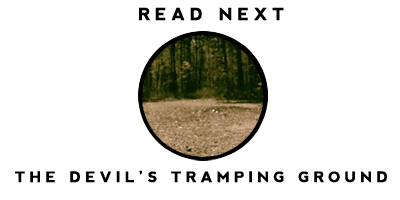