The story of Crybaby Lane is an interesting one, and a good example of how some local memories can get wrapped up in a good story and become a folk tale. Let's dig in a little and see how history and folklore come together.

There was a Catholic Orphanage in Raleigh for a good portion of the 20th century. The orphanage was part of Nazareth, a Catholic Community founded a few miles outside the borders of Raleigh in 1899 by Father Frederick Price. Price was the first native-born North Carolinian to be ordained a Catholic priest. The site was four miles outside of what were then the Raleigh City Limits, stretching along a good chunk of Western Boulevard.

The Nazareth Orphanage in the early 20th Century. Photo from the State Archives of North Carolina.

That orphanage founded by Father Pierce did, indeed, burn down. It burned down several times. In 1905, in 1912, and in 1961. But did any of these fires happen in a way similar to the details of the story?

All the versions of the Crybaby Lane story say the fire happened either sometime in the late 1950s or specifically in 1958. None of the dates of recorded fires at the orphanage match that exactly, so we'll take 1961 as being close enough.

The fire at the Nazareth Orphanage in 1961 was started accidentally by a priest, the Reverend Raymond J. Donohue. Donohue was displaying some questionable judgement by attempting to clear some wasps' nests form the eaves of one of the orphanage's several buildings by setting those nests on fire.

Father Donohue's flaming vengeance on those wasps quickly got out of control and burned that building to the ground. But unlike the fire in the story, the building destroyed in the fire wasn't a dormitory, it was the rectory. Where there were no children. What's more, the fire happened in the middle of the day and everyone escaped without harm. The only injury was to a fireman, who sprained his back running a remarkable 4,500 feet of hose from the nearest hydrant out on Western Boulevard.

But there was another, earlier, fire that did result in a death. This was the fire in 1905.

This fire did happen at night, at around 2 a.m. on October 29th, 1905. However, this fire also wasn't in the dormitory, it was in what was called "The Priest's Building," a home for the priests who ran the orphanage and for the older boys who were studying to take the cloth.

The fire broke out in the kitchen, which was on the first floor, trapping five young men on the upper stories of the building. One of these young men, whom the News and Observer write-up from the day after the fire describes as "a Bohemian," was named John Gladdish, or Gladdesh, or Glavish. The N&O astoundingly uses all thee spellings in the one 500 word article.

Gladdish was a hero, going back into the burning building to help his fellow seminarians onto the roof, and giving them the courage to jump from the third story where they were trapped onto the ground below. But when it came time for Gladdish himself to make the leap, he landed very badly and was taken to the hospital. Gladdish died that night from his injuries. 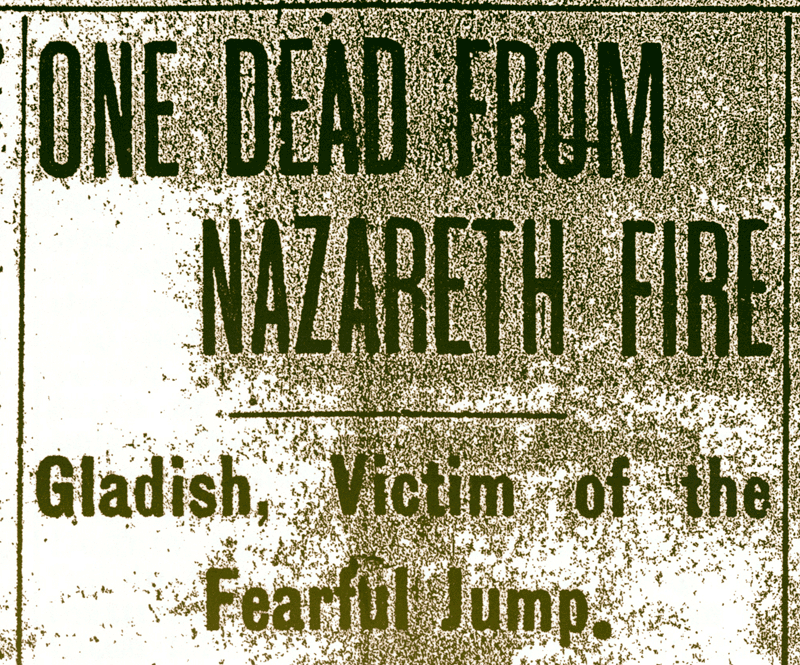 The News & Observer headline from the 1905 fire.

None of this matches the story. If we assume, as ghost stories tell us we should, that tortured souls are tied to the place where they perished, Gladdish doesn't seem a likely contender being the mysterious presence haunting Crybaby Lane. He died in the hospital, not on the Nazareth property. And he wasn't multiple orphans.

The only time a dormitory burned at Nazareth was in the fire of 1912. This fire also destroyed the school room, the stables, and a barn, and kicked off a wildfire in the nearby fields. But no one was injured in this fire.

So three fires, one death, and nothing that fits the details of our story. But none of this really matters if we're hunting for ghosts. Because Crybaby Lane isn't Crybaby Lane. The Nazareth community ended about a mile west of where what's now called Crybaby Lane is located. There was never an orphanage on the spot off of Bilyeu. And what's more, what's left of the old Nazareth Orphanage is still there.

At its largest, the Catholic Community at Nazareth occupied several hundred acres. As Raleigh expanded, The Church gradually began selling off or donating its property. A large chunk of land was granted in 1962 to build a new facility for Raleigh's only Catholic School, Cathedral Latin High School, which later became Cardinal Gibbons High.

The remaining building of the orphanage remained in use as an orphanage until 1975, when Bishop F. Joseph Gossman made the facility into the Catholic Center of the Diocese. This building stood on Nazareth Street, off of Avent Ferry Road, about a mile west of Crybaby Lane. The building was demolished as part of North Carolina State's Centennial Campus expansion, removing the last piece of this part of Raleigh's history.

So, while there was an orphanage near Crybaby Lane, there was never an orphanage on that spot and no orphans ever died there. The Crybaby Lane off of Bilyeu is just a sheltered little piece of undeveloped land, which was close enough to where people remembered the orphanage to be to become confused with memories of the actual orphanage and it's fires. That's the way it is with ghost stories, sometimes if you dig around you can find some real history that played a part in forming the story. Memories get confused and elaborated on when they're retold, truth and fiction get mixed in together, and throwing a ghost just makes for a good story. So think about the people and lives that were lived in a vanished part of Raleigh when you go down to stand where the orphanage wasn't at a place called Crybaby Lane. 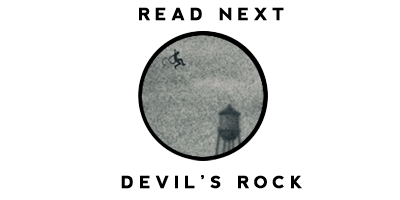