Some time ago when times were hard there was man out wandering the roads looking for any work he could find. He walked from place to place, town to town, with nothing but the shoes on his feet, taking what he could get and then moving on. One evening, he found himself on a lonely road deep in the hills far away from any town. The air was cold and he wanted a place to sleep where we wouldn't wake up covered in frost.

As he walked down the road, he heard whistling and saw a man walking towards him.

"Evening, friend" he called out, "I don't suppose you know anywhere around here I might lay my head tonight?"

"Evening, friend," said the whistling man, "Gonna be a cold night. I'd welcome you into my own place, but I got the wife and thirteen children and we're three and four to a bed already."

"If I had a barn, I reckon I'd be sleeping there myself. I'm just out here walking for a little peace and quiet myself. There is one place I know of, but it might not be to your liking"

"Mister, as cold as tonight is shaping up to be, I reckon any place is to my liking."

"Well, there's a little shack just round the next bend. Ain't nobody lived there for years, 'cause they say it's haunted."

So the whistling man pointed out the way to the shack and the wandering man thanked him and set off down the road.

He found a tiny little cabin, all tumbled down with holes in the walls and in the roof, tucked right up under the side of the hill. But it was most of four walls and most of a roof so he gathered up a few sticks to start a fire and went in.

All the furniture from the cabin was long gone, there was only an old wooden box sitting in a corner. The man looked in and saw it was full of old animal bones. Figuring he didn't need any animal bones, the man left it be and built a small fire in the old fireplace and kicked off his shoes to settle down for the night.

He hadn't been there long until he heard a strange scraping and scratching sound behind him. He turned around and saw that those old bones were dragging themselves out of that box, crawling out on paws bare of flesh and forming itself into the shape of a cat.

That skeleton cat walked on over to the man. It sat there for a minute, licking its fur, or at least what it would have licked if it still had fur and still had a tongue. Then it looked right at the man. There was a strange green light glowing out of those empty eye sockets.

"Well," said the cat, "I reckon there's nobody here but you and me."

"Well," said the man."I reckon ain't no time before there ain't gonna be nobody here but just you!" and with that he didn't even bother with the door but took off right out the window and started running down the road.

He must have put a mile between him and that cat in just a few minutes when he ran right into the whistling man walking down the road.

"Hold on there, friend, what are you in such a hurry about?"

And the man told him what happened.

"Yep," said the whistling man, "I figured something like that would happen. So what are you gonna do now? You gonna go back and get your shoes?"

"Naw," said the man,"I reckon they can stay up there with about a hundred other pairs I saw by the fireplace."

More About This Story

This story was first recorded in 1919 in Tom Pete Cross' Witchcraft in North Carolina. This story, which is well-formed joke, complete with a great punchline, was originally told in North Carolina's African-American community.

The African-American communities in the Appalachian mountains have a unique storytelling tradition, which was named the Affrilachian tradition by Kentucky poet laureate Frank X. Walker. African-American folklore often treats witches and ghosts more lightly than they're treated in the stories told by the white communities in America. This is a trait shared with European Jewish folklore and the stories told by other minority groups who have found themselves under considerable social and political difficulties across the world. The reason behind this is probably fairly simple, why bother making up stories to scare yourself when you've got real things to worry about? 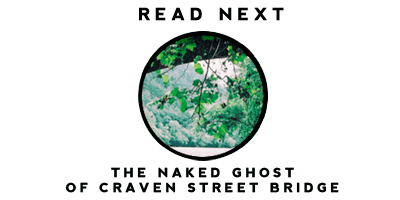