There's a spot near Murphy, at the far western edge of the state, that the indigenous Cherokee named Tlanus'yǐ, "The Leech Place", because this seemingly quiet spot on the Valley river was where something dangerous and strange could be found.

The story begins a long time ago, at a place in the Valley River just before it joins the Hiwassee. Here, there's a thin ledge of rock running across the river which is just passable as a bridge. But just below this natural bridge, there's a deep hole in the river, a place where the water disappears into cold darkness. All of this is overlooked by a high ridge on on the south bank, with a trail running across it that offers a clear view down into the river.

It's along this path that one day a small group of Cherokee men were walking. As they looked into the river below, they noticed something strange. It was a large, red, something, as large as a house, sitting on the rock ledge in the river. As they wondered what it was, they saw it slowly begin to move and unfurl. It stretched out its long, flat, fleshy body along the ridge like a ribbon, until that could see that it looked like a leech. A giant leech, whose body covered almost the whole of the ridge that bridged the river. It was a bright red, with white stripes running along its body. The thing lay on the rocks for some time, and then slithered down into the deep hole in the river.

The men were astounded, and even more so when the water beneath them began to bubble and foam, almost as if it were boiling. And then a giant waterspout shot up from the pool, strong enough that it would have swept the men into the river if they hadn't been wary and ran as soon as they saw it coming.

This was the leech's trap. It would wait in the depths for unsuspecting people to walk along the ridge, and then send out the waterspout and suck them down into the river. Many unwary people died this way, and their bodies would be found later lying by the side of the river with their noses and ears eaten off.

The Cherokee who lived in the area soon began to avoid taking that path, out of fear of becoming the creature's next victim. But not everyone was so cautious. There's the story of a young woman who was walking with here baby by the river and decided she wanted some fresh fish to eat. She walked out along that ridge in the water and sat her child down on the exposed rock, preparing to cast her line into the water. But the river began to bubble and foam, and she grabbed her child and ran out of the way just as the whole ridge was engulfed in angry, foaming water.

Another story tells of a young man who wan't so lucky. He laughed at the story and said he would show everyone in the town that it was nonsense. So he set off towards that spot on the river, singing about how he would wear leech skin leggings when it was all done. He walked boldly across that ridge overlooking the river, with many people from the town gathered to watch and see what would happen. He got halfway across before the water started to bubble and foam, and a waterspout shot up, dragging him down into the river. He was never seen again.

The place the Cherokee called Tlanus'yǐ is still there. It's said that even today you can look down into the river and see something moving in that deep hole in the water. But if the water starts to bubble, best to move out of the way, and fast.

This story is adapted from James Mooney's 1900 Myths of the Cherokee. Mooney was an anthropologist who worked for the Smithsonian Institution's Bureau of American Ethnography. Mooney learned to speak, read, and write in Cherokee, and spent years among the Eastern Band in North Carolina compiling books of the religious and cultural practices of the Cherokee nation. 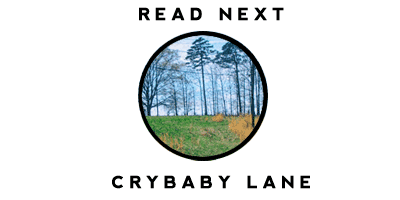