Ghosts of The Biltmore House

The Biltomre Estate, located in Asheville, was originally built to be a vacation home for George Washington Vanderbilt, one of the heirs to the Vanderbilt industrial fortune.

George Washington Vanderbilt was fortunate enough to have been born into a life that offered him staggeringly vast amounts of money that he didn't have to lift a single finger to earn. In 1886 he travelled to Asheville with his mother fell in love with the mountains and the town. He decided, at the tender age of twenty-six, that he would build a vacation home there. Thinking something with a little yard would be nice, he purchased 125,000 acres and called in the shovels. Vanderbilt would eventually spend a significant part of his inheritance constructing the estate, including building out a private railway line to bring his family and guests to the grounds, which were then far outside the bounds of Asheville.

Though the city has crept up on it over the years, the estate remains impressive and the house remains the largest privately owned home in America. Now open to the public, the house, the surrounding estate, the winery, and the related attractions make Biltmore one of the biggest tourist destinations in North Carolina. The gorgeous home and its surrounding gardens have been featured in multiple movies, from the Peter Sellers' classic Being There, to the less well-remembered Hot Heir, starring Raleigh's own perennial political candidate and Guppy The Clown Ron Campbell. But some visitors to the Biltmore House have seen even stranger things.

In addition to his architectural passions, George Vanderbilt was an avid collector of books, art, and artifacts. He and his wife Edith turned Biltmore into a private museum of luxury, and would host lavish parties and entertain guests over extended stays. 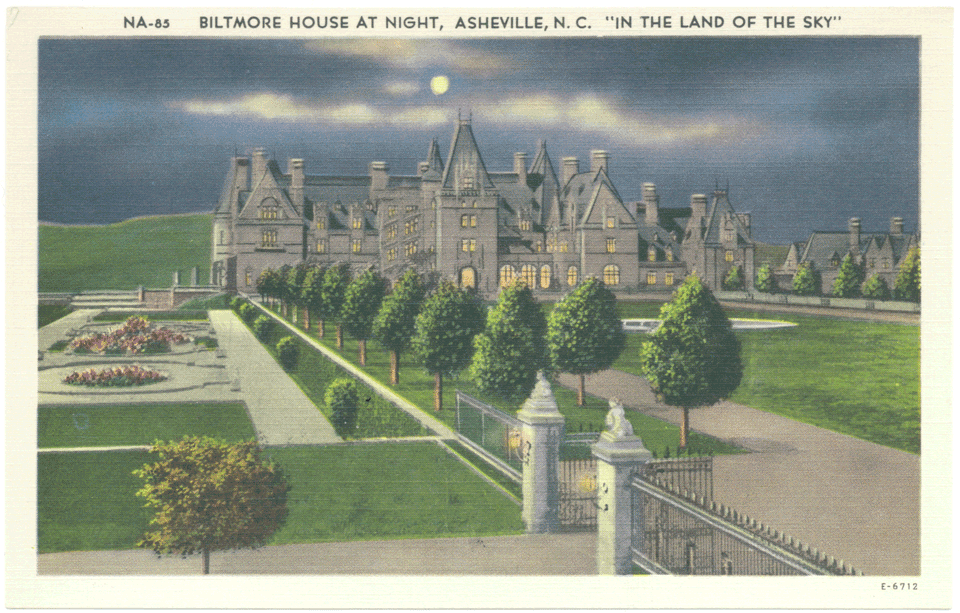 The Biltmore House at night. Vintage postcard from the author's collection.

When he died in 1914, his estate passed through his daughter to his grandsons, and it was they who decided to open the estate to the public. Ever since then, there have been rumors that the founders of the estate may still be around.

During his lifetime, Vanderbilt was particularly proud of his library, and would spend a considerable amount of time there, pouring over some rare edition or other. It was Vanderbilt's particular habit to retreat into the library when he saw a storm approaching. His ghost may be continuing this habit, as workers and visitors to the estate are said to have seen a shadowy figure in the library, usually when the skies are dark and there is an oncoming storm.

George Vanderbilt may also not be the only member of his family keeping up old habits. Edith Vanderbilt was known to personally journey down to the library to remind her husband when it was time to join his guests. Today, many people passing through the library have reported hearing a woman's voice whisper the name "George." She may be summoning George away from his studies and back to what seems to be an eternal party. Workers and visitors have reported hearing the sounds of clinking glasses, laughter, and snatches of music echoing through the halls. There have even been reports of the sounds of splashing coming from the estate's now-empty swimming pool.

If the Vanderbilts are indeed continuing their lavish existence into the afterlife, it may be evidence that while you may not be able to take it with you, you also don't necessarily have to leave it all behind.

The Biltmore Estate is located in Asheville and is accessible from clearly marked exits off both I-40 and I-26. Just follow the signs. The house is open year-round, some other attractions on the estate are seasonal. 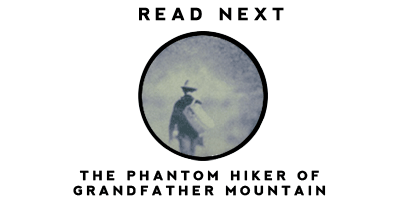