In front yards across the country, shinty-brightly colored bottles sticking up from an iron frame has become a common site. Many people who have these trees in their yard think of them as just an attractive decoration, something to catch a little sunlight on a summer's day. They may not even realize that they're participating in a folk magic tradition that grew in the Southeastern United States, from seeds that came over from Africa.

The Africans people who were forcefully brought to America arrived with religious traditions and practices. But these practices were not culturally homogenous, multiple traditions, languages, and religions that were all forced together and forced to adapt and survive in a new and deliberately hostile environment.

A significant number of people were imported from Western Africa. In this region of the continent, multiple ethnic and cultural groups shared a similar practice, that of hanging empty gourds outside of villages or homes to catch malicious spirits and prevent them from entering and doing harm.

These practices persisted with the passage to America, while adapting over time to use the materials available. The heavy gourds of Africa being less easy to find in America, a suitable substitute took their place, glass bottles. Particularly favored were blue glass bottles. Blue as a color has a long tradition of being viewed as protective against evil spirits, a belief which can be found throughout much of the Mediterranean world, across Northern and Western Africa, and throughout the Islamic world. Porch roofs, shutters, and doors are still painted a special, protective, pale shade of blue called Haint Bule throughout the lowcountry of Georgia and the Carolinas. Blue bottles swinging from trees to catch spirits before they could enter the home can still be seen across the same region.

But glass bottles do have one disadvantage that separates them from dried gourds when hung by treads from trees, they're much more likely to break in the wind. And so the tradition adapted again, and bottles would be stood on upright branches planted firmly in the ground. The branches were eventually replaced with wooden poles and welded concrete rebar.

Shiny, bright bottles sitting on a tree in the yard do more than just catch spirits, they also look pretty. The bottle tree spread across the country, picked up by people who only knew it as a yard decoration, unaware of it's actual purpose as a way to catch evil spirits. The tree pictured here was photographed in Michigan in 2019, placed there by people who were completely unaware of their tree's African roots. 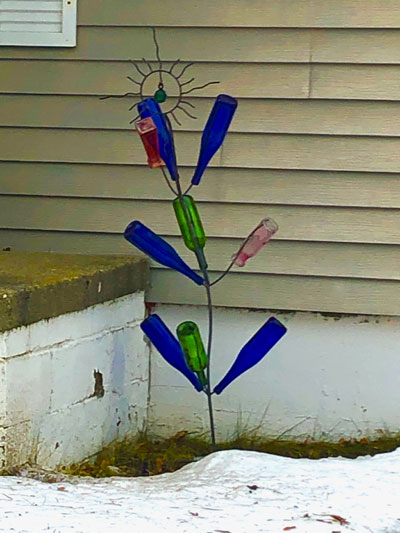 A bottle tree, photographed in Michigan in 2019