There's a cemetery in Beaufort that's simply called The Old Burying Grounds. It is undeniably an old cemetery, the earliest marked grave is dated to 1711. Its beautiful, peaceful old tombstones are covered with a shady canopy of moss-covered live oak trees. But there's one grave in the cemetery that has has story to tell that sadder and stranger than most, and it tells it on the simple wooden plaque that marks the grave and reads "Little Girl Buried in a Keg of Rum."

The story begins in the mid-18th Century, when a family named Sloo (pronounced Slow) traveled from England to the North Carolina colony bringing with them their infant daughter. Sloo was a merchant captain who made his living trading in the English settlements scattered across the Atlantic. The family was prosperous, and they soon built a gorgeous house which still stands on the Beaufort waterfront.

But despite thriving in the colonies, the mother was homesick and often spoke of England. As the Sloo's daughter grew, hearing her mother's stories, she too began to long to see the distant land where she was born. Whenever her father was about to set sail, she would beg him to take her with him so she could see England for herself.

The father knew that life at sea was difficult. The voyage to England took months, and a sailing ship was no place for a child. But he also wasn't blind to his daughter's happiness. After years of pleading, he finally agreed that she could travel with him. The mother consented to the voyage on one condition, that no matter what happened, he would bring their daughter back to her in Beaufort. And so, one bright morning, leaving his wife behind, Sloo and his daughter set sail for England.

And so the young Sloo girl finally got to see the land where she was born. She delighted in the excitement of London and marveled at being in a land where not everything was new.

But on the return voyage, the father's forebodings proved to be all too true. Just a week or so out of port, the young girl fell ill and died.

It was the custom in those days for anyone who passed away on a ship to be buried at sea. But Captain Sloo couldn't bear to allow his daughter's body to be lost in the depths of the ocean. And he recalled his promise to his wife, no matter what happened, he would bring her daughter home to her in Beaufort.

So the Captain did what he could. There was only one thing on board the ship which could preserve a body, something which every sailing ship carried in copious supply, rum. Captain Sloo gently placed his daughter's body in one of the many barrels of rum in the hold and sealed the barrel shut.

When he returned home with the heartbreaking news to his wife, she wept for her lost daughter. Not wanting to disturb her further by exposing her to the condition of their daughter's body after being soaked in rum for months on end, Sloo arranged for his daughter to be buried in the cemetery with a barrel full of rum as her casket.

But there are some who say that her story doesn't end there. There are those who say that the figure of a young girl can be seen running and playing between the graves in the Old Burying Grounds at night. They say that the tributes left on the young girl's grave are often moved about the graveyard at night, often found sitting balanced on top of other gravestones or in places they couldn't have moved to by just the wind.

How To Get There

The Old Burying Grounds is located on Ann Street in Beaufort. The grave of the Rum Girl is located near the back of the cemetery. The graveyard is open to the public, and maintained by the Beaufort Historical Association, which also offers tours of the graveyard.

Appallingly, in June 0f 2016 the grave of the Rum Girl was severely damaged by a vandal who, for unfathomable reasons, set fire to the wooden marker. At the time of writing, The Beaufort Historical Association was hopeful that the grave can be restored, but would certainly be grateful for donations to assist with the repairs and to help with the costs of maintaining this historic site. 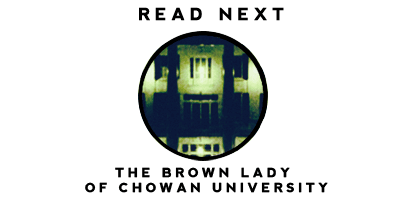