The Portrait of Theodosia Burr

Theodosia Burr Alston was one of America's first great women of learning and accomplishment. The daughter of scandal-ridden Vice President Aaron Burr, Theodosia was widely acknowledged to be intelligent, cultured, and sophisticated. Her disappearance, and the mysterious appearance of her portrait in a home on the Outer Banks, remain one of the most intriguing unsolved mysteries of the first days of the American Republic.

in 1801, Thedosia Burr was married to Joseph Alston, a wealthy South Carolina planter and later governor of the state. The marriage was not a happy one. It was marriage more of economics than affection. Aaron Burr is said to have offered his beautiful daughter to the wealthy South Carolinian to provide some security for his declining family fortune.

Burr may also have been seeking dynastic allegiances. In 1807, Burr was put on trial for treason for allegedly forming a plot to lead a portion of the southern states in secession and have himself installed as king of the new country. Burr was acquitted, but he fled to Europe for four years to avoid further scandal. It would be 1812 before he returned to New York.

In South Carolina, Theodosia Burr Alston suffered from long bouts of ill health. She frequently traveled to spas seeking treatment, and would often withdraw from the social life in Columbia and Charleston for months on end.

he Nag's Head Portrait of Theodosia Burr, now at the Lewis Walpole Library in Farmington, Connecticut.

In 1812, Theodosia's young son died. Grief-stricken, Theodosia fell into a deep depression and it was months before she felt well enough to travel to meet her recently-returned father in New York. On December 31, 1812, Theodosia Burr Alston boarded the schooner Patriot in Georgetown. She was never seen again.

The Patriot disappeared somewhere between South Carolina and New York. Various explanations have been offered offered for the disappearance. The War of 1812 was raging, and some say the Patriot was sunk by enemy action. Others say that the ship fell victim to a group of wreckers known as the Carolina Bankers. These men operated out of Nags Head, and set up false signal lights to draw ships aground in the treacherous waters around the Outer Banks. They would descend on the wrecked ships, murder the passengers and crew, and take anything worth plundering.

The fate of the Patriot will probably never be known. We do know that years later, a fine portrait said to be of Theodosia Burr turned up in a humble fisherman's cottage near Nags Head.

The story goes that in 1869, a Dr. William Pool was called in to treat a poor fisherman's elderly wife who was near death. The doctor offered what treatments he could to ease the woman's pain, but there was little else he could do for her. The fisherman was grateful, but had little money. Instead, he produced an unusually fine oil portrait of young woman and asked if the doctor would accept it as payment.

Shocked at finding such a valuable piece of art in a poor man's house, Dr. Pool asked the fisherman how had come by it. The fisherman told the doctor that many years ago a young woman had drifted ashore in a rowboat near Nags Head. The woman had no memory of who she was or where she was from, and the only item in her possession was the fine portrait which she would not allow to be removed from her grasp.

The members of the village cared for the young woman and nursed her back to health. Eventually, she settled down in the isolated community and the fisherman had taken her as his wife. The portrait that was the only evidence of her past life, whatever that may have been, had hung in their small cottage ever since.

The doctor said he would gladly accept the painting as payment, but upon hearing this the old woman rose out of bed, saying "It is mine! You shall not have it! I am on my way to visit my father in New York, and I am taking this picture of his darling Theodosia!"

The old woman seized the portrait and ran into the waves. She was never seen again. But the next day, the portrait floated back onto the beach.

William Pool's family kept the portrait and told the story for years. Now called The Nag's Head Portrait of Theodosia Burr, the painting can be seen in the Lewis Walpole Library in Farmington, Connecticut. 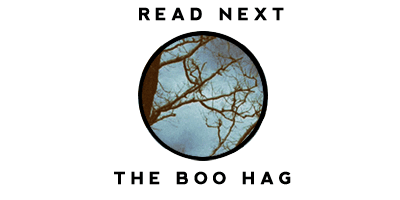